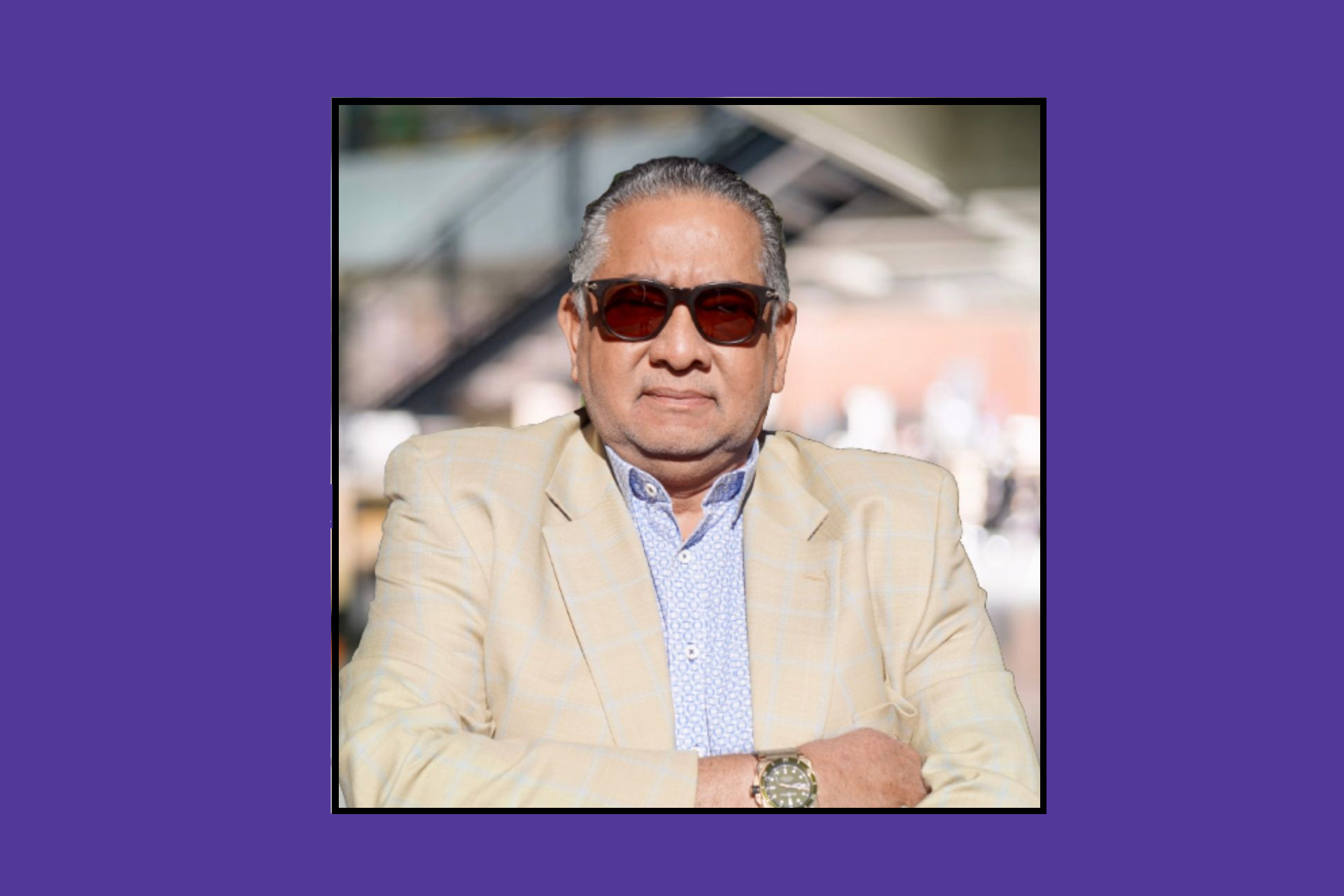 This is a particularly hard article and newsletter to write, hence being later than usual. Exactly a week ago, my world was upended by the dreaded pandemic. My father-in-law, friend, mentor, and pillar of strength, Iquabal Sindhi, succumbed to a short illness with the dreaded Corona virus. 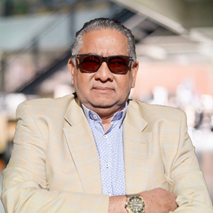 Despite his caution, despite masking, despite a vaccine shot (he was probably infected within the window period), he contracted the virus. As we have seen time and time again, community spread and the overall prevalence of the virus in a specific geography means that even those who take precautions are still vulnerable.

I have written a couple of articles on this pandemic as we have progressed through the various stages. This is personal for me but I will look to add an additional dimension to the discourse on the pandemic as I believe that sound analysis needs to resonate in the SA pandemic narrative and discourse.

The contrast is stark. In Canada, where I live, there is a sense of hope emerging. We have just started to see the lifting of what has been one of the hardest and longest lock downs globally. Vaccination rates for first doses are over 60%. Second doses are being accelerated. There is an expectation of a slightly more normal summer.

A winter of discontent

My summer will not be normal. I share a winter with South Africa. My family in South Africa are under siege by a deadly 3rd wave. Vaccine rollouts there have been plagued by a plethora of mishaps, miscalculations, and misfortunes. From under-procurement of vaccines to allegations of graft in the pandemic response to the most recent unfortunate but necessary destruction of millions of JnJ doses due to contamination risks, the end result is a vaccination rate of around 1%.

Furthermore, vaccinations prospects do not look promising. In this piece (Rise of the Variants) written in April, I outlined that while divergences between EM and DM was a feature, that SA was underperforming even its EM peers. Yes, vaccines are the only eventual way out, but while awaiting the vaccine (production or procurement), it is essential that transmission is controlled. This is where SA is faltering too.

Drowning in the Third Wave

Most recent data from the National Institute for Communicable Diseases shows that the daily count in SA at the time of writing has surpassed 13 000! SA is drowing in the Third wave but has only just pushed the lockdown to level 3.

This is the poisoned chalice as the debate between Lives vs. Livelihoods is a strong one, especially in a country like South Africa where many face existential risks by COVID as well as poverty. 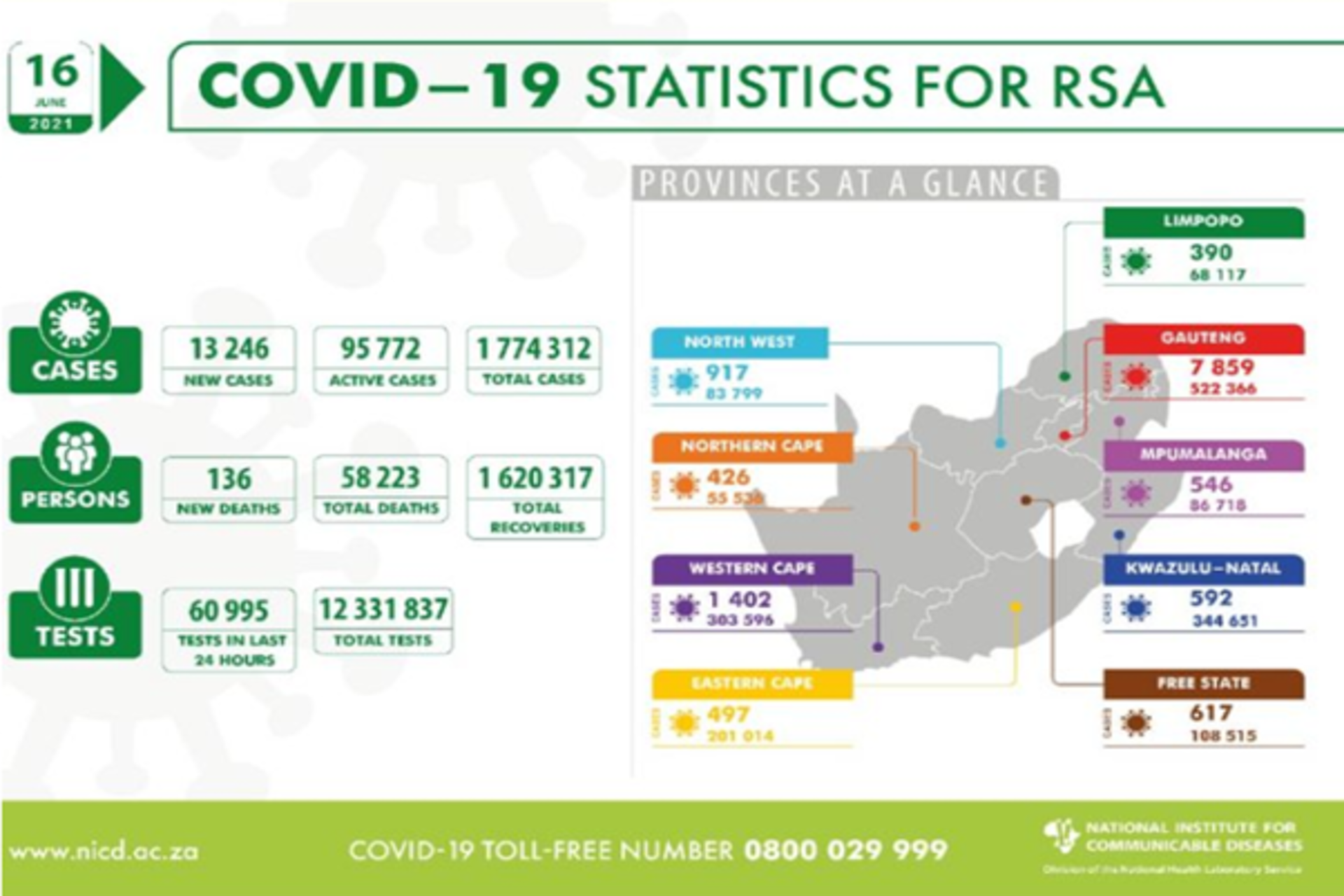 The question is whether the response from authorities is appropriate and why the timing thereof always seems so disconnected. I am no epidemiologist, and I am not a medical doctor. There are people smarter than me advising the president on these matters. That is why it is so hard to believe that this is the soonest SA could have reacted to the Third Wave.

In fact, about 3-4 weeks ago already, I had tweeted in this thread about how the third wave was starting. Why wait 3 weeks to act? How may countless lives have been added to the cost of this crazy pandemic due to reticence amongst leaders?

I think with a markets head on and like to look at different perspectives on data. I would posit that it is because people look at absolute levels rather than the ‘delta’ or the rate of change in the data. (To be clear, we are not discussing the ‘Delta Variant’).

The rate of change would measure acceleration of a trend and would have signaled a greater sense of urgency! This is what the delta looks like : 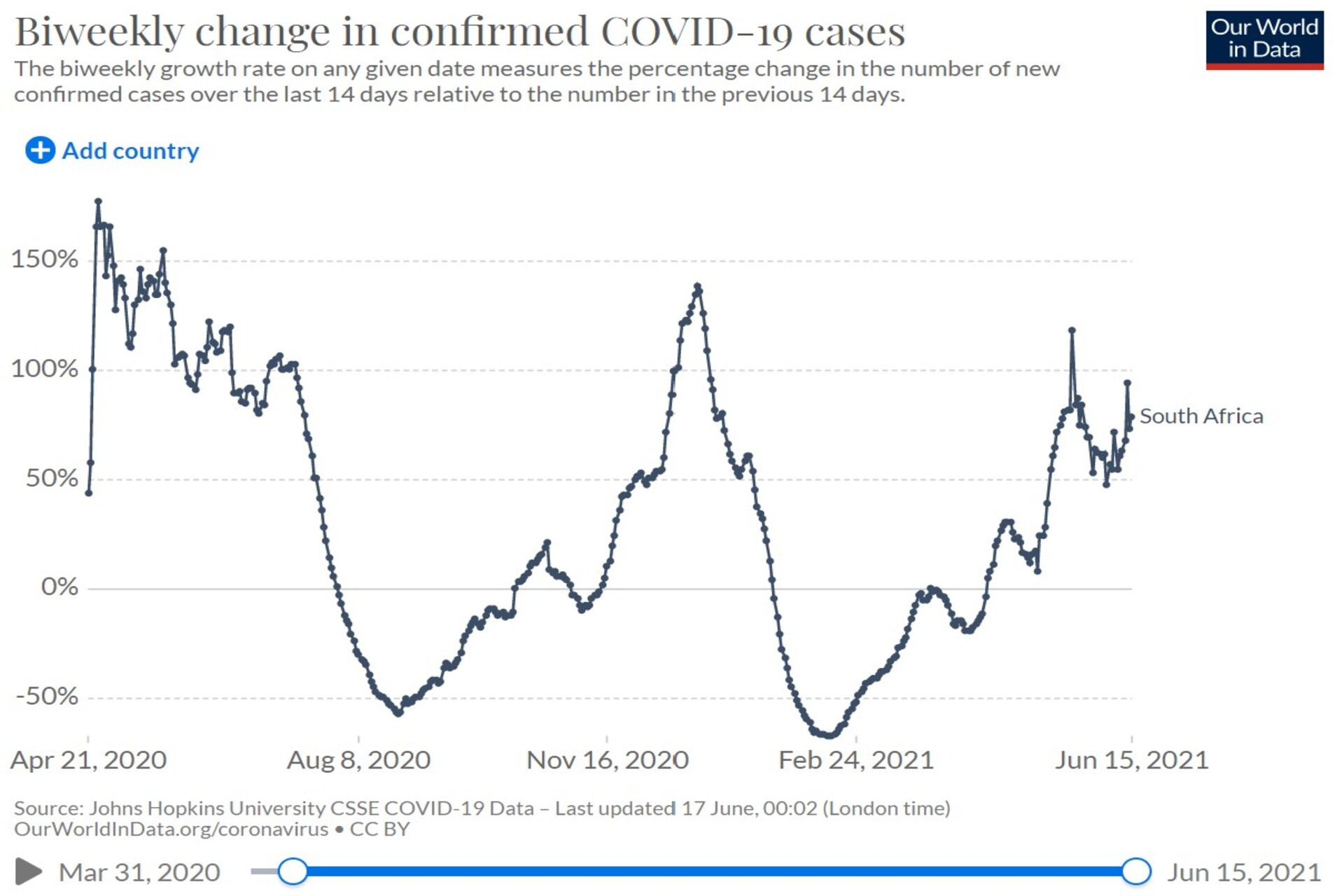 From this ‘slice’ of the data, we can see that early warning signs were apparent when ‘case declines’ reversed at the end of February 2021. Yes, maybe that’s too early to react. Cases stayed in decline until mid-March.

But from the end of March into April, looking at the data one could have concluded that the 3rd wave was coming as per my references thread above. But alas, perhaps snoozing at the COVID wheel or distracted by internal squabbles. I won’t go there.

What about other indications? A simple ‘Google trends’ chart will show the uptick in ‘Covid’ related searches in SA since Mid-April. This correlates with the uptick in the delta of bi-weekly cases. This may be coincidental, but I suspect an underlying societal awareness and concern. 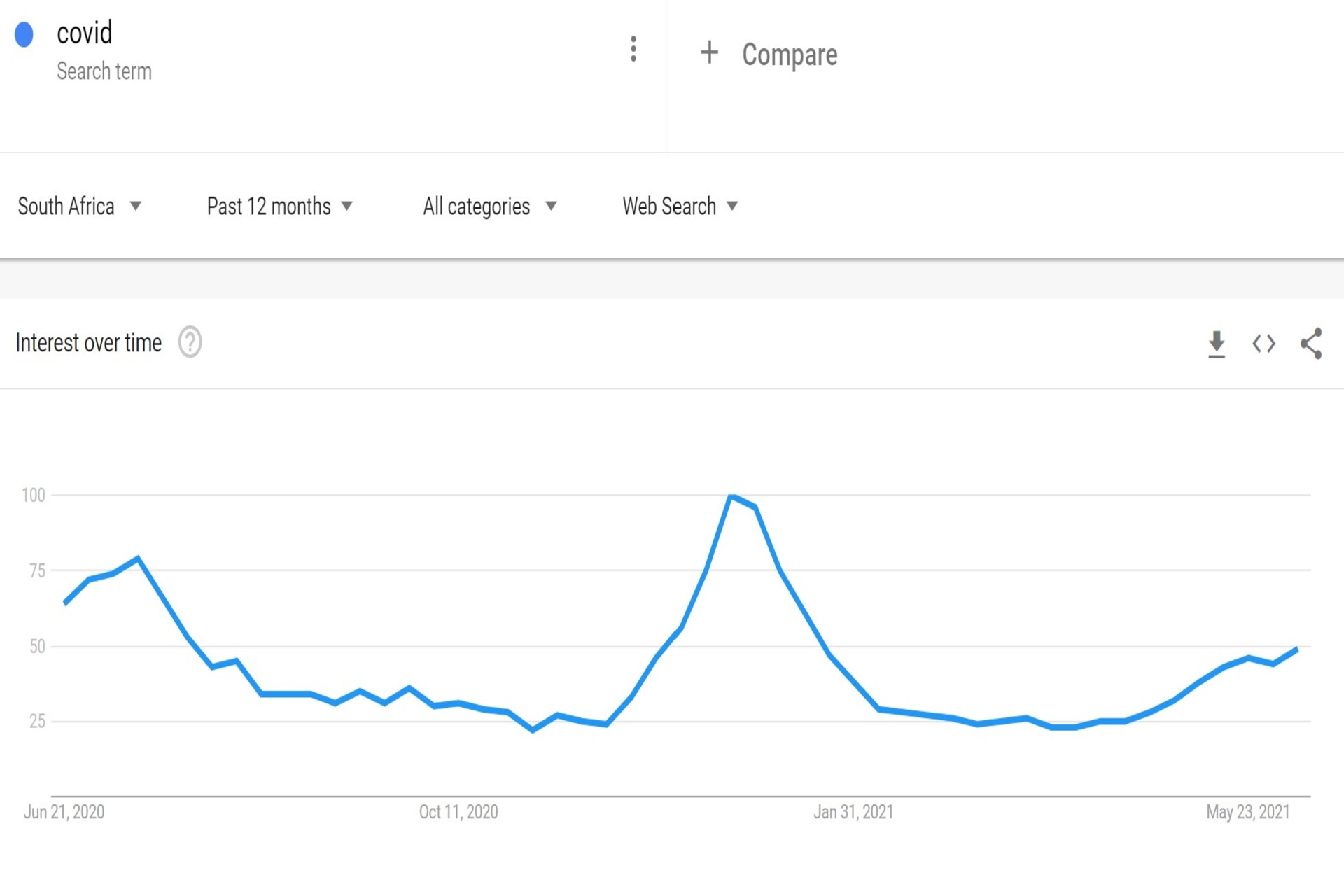 Let’s look forward. Some concerning developments are the anti-vax sentiments, denial of Covid (thinking its just a flu?) . Looking at Google trends on this in South Africa using ‘flu’ as an anecdotal search term shows a startling rise and bodes poorly for continued transmission trends. 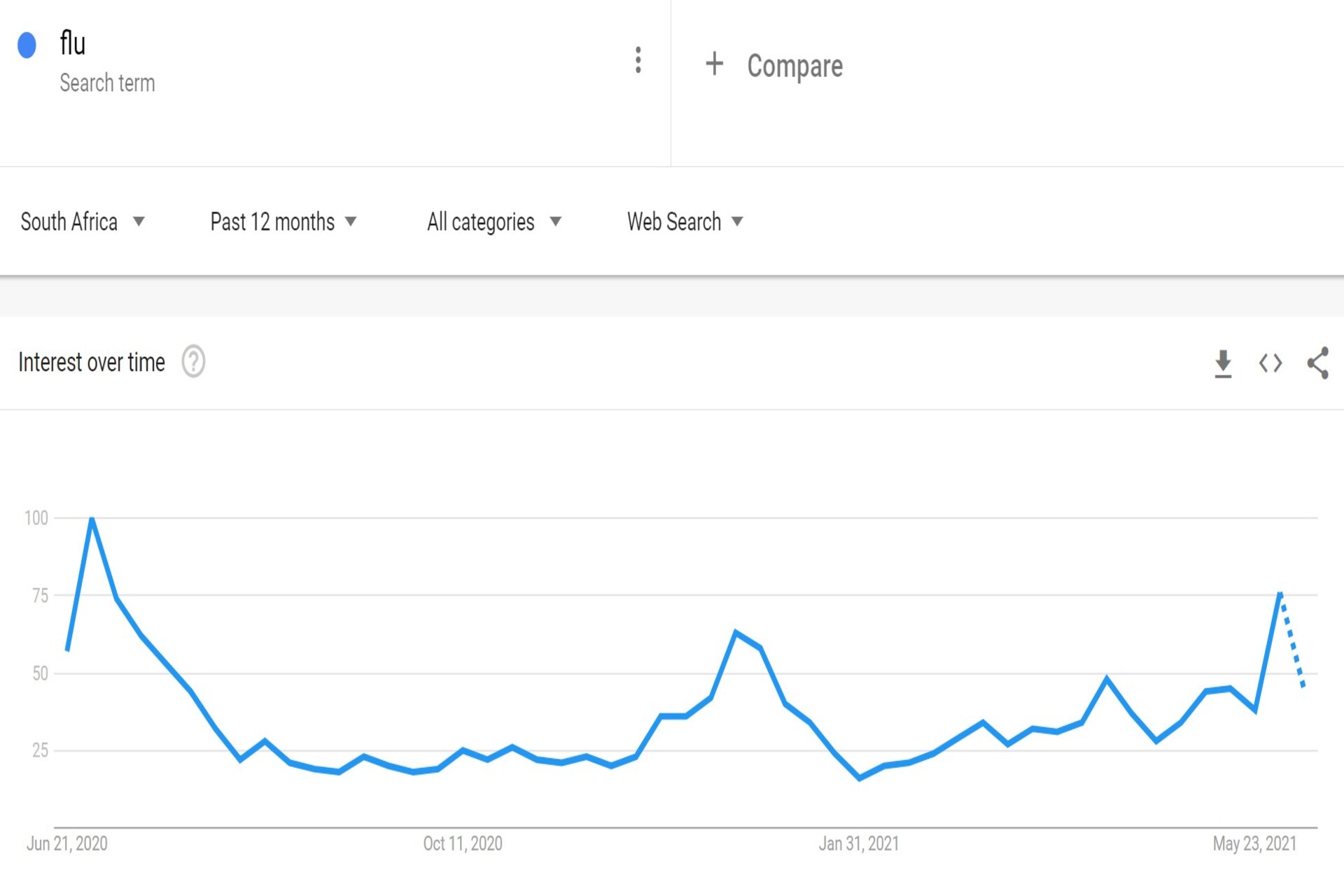 The micro-structure of the pandemic response, like the fact that COVID tests are not free and accessibility not as ubiquitous as other countries are also limiting factors. It is widely suspected that despite the 13k daily cases, that this number may be under-reported by a magnitude of 3 at least!

The Lockdown Elephant in the Room

Lastly, I would like to address the elephant in the room, that lockdowns ‘don’t work’. Again, lets look at the hard data. I have mapped the bi-weekly COVID change (delta) against the phases of lockdown in SA.

Let’s unpack this chart below in detail. The purple line is the change in bi-weekly cases, mapped to the left axis in percentage terms. The grey line maps the levels of lockdown on the right axis.

Where stages have been ‘tweaked’ (like the closing of schools in July 2020), I have indicated this as a level 3.5 instead the official level 3. Similarly, relaxed travel restrictions in November 2020 are illustrated with a level 0.75 vs. an official level 1. These are subjective but attempt to capture some micro changes. 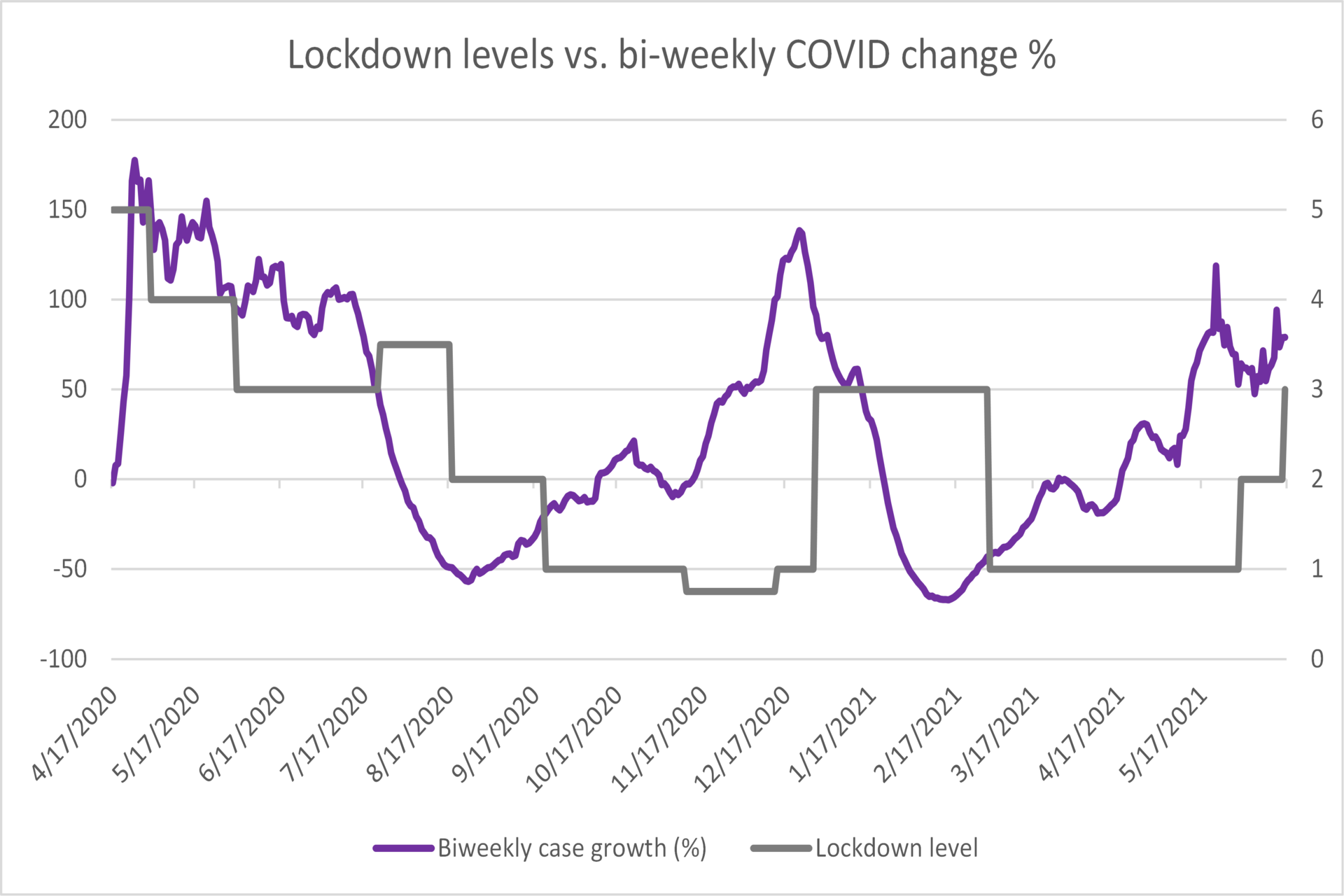 From this, we can see that the exceptionally severe level 5 lockdowns in the early stages, subsequently eased to level 3, yielded some results as case count delta fell sharply. Easing like in September 2020 and travel changes in November both happened against a backdrop of an increasing delta necessitating a much sharper reaction by January 2021.

Similarly, the easing in March 2021 happens against the backdrop of a rising delta again indicating the reactive and ‘behind the curve’ nature of policy responses and the now necessitated sharp reaction function. This is what informs my view of behind the curve and ‘too late’.

I take the point that if lockdowns are too early and too severe, that the economy bleeds. I have gotten pushback on Twitter along these lines. It is valid which is why I suggest that looking at hard data in a different way may advise what too early and too late may be.

An all too Human toll

But lets keep this financial for those making the ‘livelihood’ argument. I don’t have the granular demographic data so in the interests of brevity, lets make some assumptions. If we assume that less than half of those were bread winners, that’s 25 000 households affected. In SA, dependency ratios are high (people dependent on a single breadwinner).

With dependency ratios of 3-5 times (maybe higher), that is almost 100 000 livelihoods threatened. For every entrepreneur affected, every tax payer, every worker, the financial ripple effects of getting COVID (in my humble opinion) are far more devastating and longer lasting than the effects of a well-managed and enforced lockdown.

Yes, there have been failures in building capacity in the health system during lockdowns which brings into question the social contract, trust in authorities and the perceived pointlessness of the lockdowns. That said, we must separate ‘transmission’ from ‘infection’ if we are to credibly contain this scourge stealing our loved ones and livelihoods too. Lockdowns affect ‘transmission’ and prevention is better than cure.

A Better tomorrow – No excuses

I am raw. I am disgruntled. I am hurt. I am human. But I also look at the data in disbelief and implore you all to do the same. Check out Our World in Data and Launch and Scale Faster and play with the data yourself.

Wear a mask. Think of the wider societal cost when you are contemplating compliance with measures. Think of the lives you may be costing without knowing it. And lets hold leadership to a higher standard. The ‘woe unto us’ narrative is crap (my apologies for the crass language) . The time for excuses is past. Other EM’s are fighting this. It can be beaten but to do so, we need accountability and firm, unwavering leadership please.

Iquabal Sindhi was a dad to me when I lost my own. He was a businessman, a father, a papa bear to his grandkids. His light has left this world. Let us work harder to fill the world with more light and hope to honour the fallen. Remember us and the countless lives lost in your thoughts and prayers and let us push to build a better tomorrow. 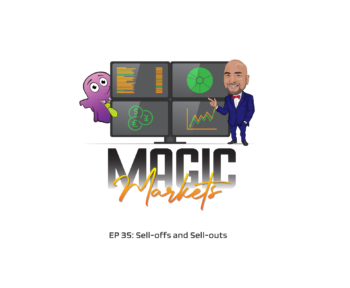 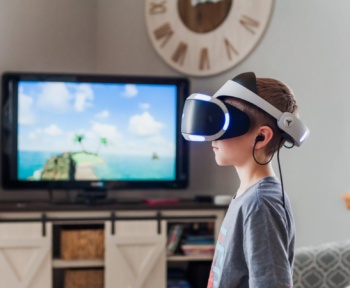