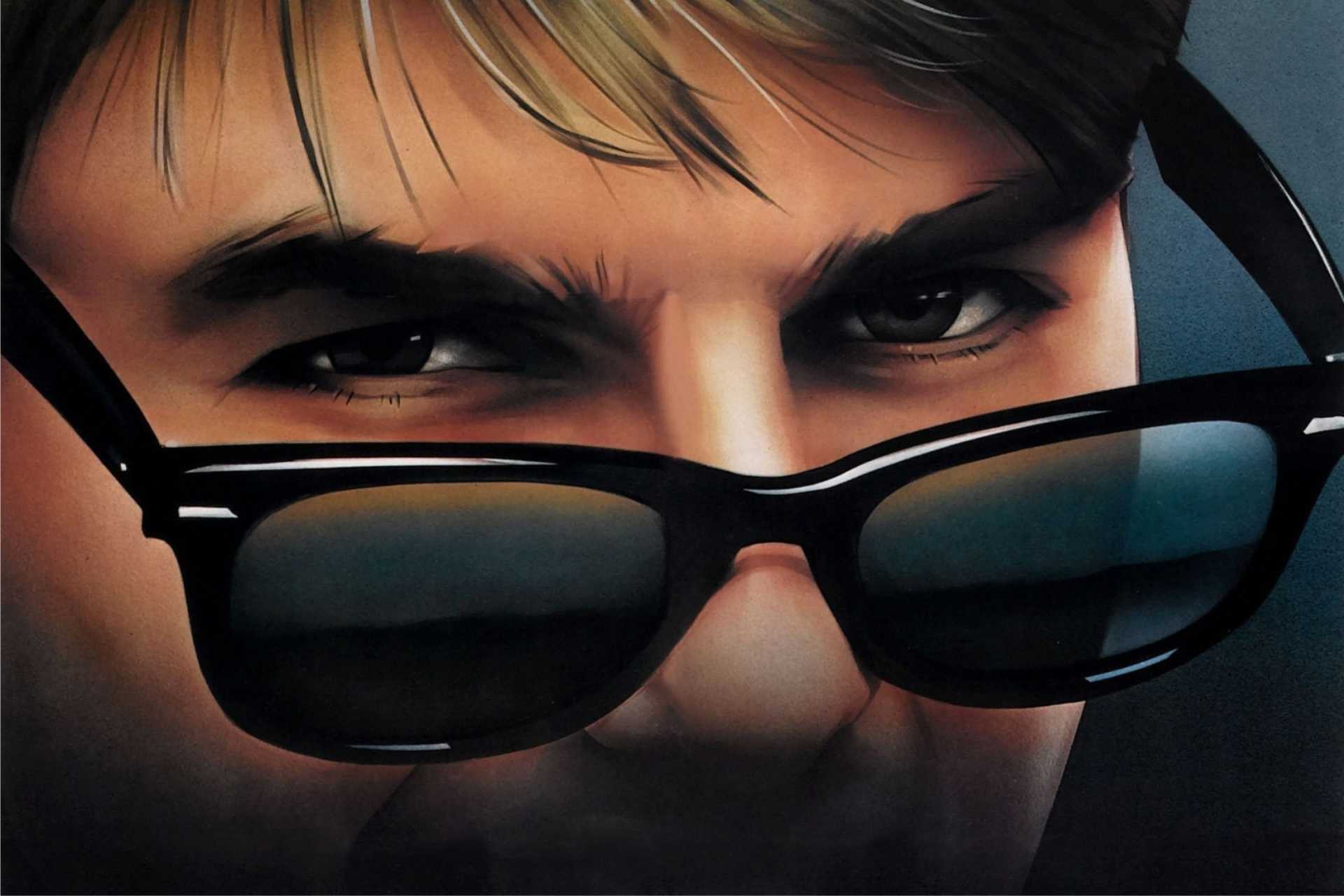 Readers will be forgiven for harking back to the 1983 Tom Cruise cult classic when reading the title. ‘Risky Business’ was a movie which was lauded as Cruise’s breakout film and delves into themes including materialism, loss of innocence and capitalism.

No, I’m not about to jump on a couch or dance around the house in my underwear, but I will be delving into the common themes as they relate to markets. Has materialism merely morphed into ‘market mania’, is this the new capitalism and will the inevitable ‘loss of innocence’ manifest should we see a market correction?

This week’s letter and blog post is very much orientated around a general sense of unease I have in the pit of my stomach. It’s been a stellar start to the year and markets are off to the races.

From the slump of March last year, Markets are up a dizzying 80% and more. Yes, I know that’s a peak to trough analysis, but the scale has been staggering. Even if we consider the pre-Covid levels, the SP 500 has put in a respectable 20% over the rolling 12 months. Nothing to complain about considering that equities generally return an average of 10-15% p.a over the long term.

However, over the last week, as markets continued to post to record highs. Quite a few of the counters I watch have started to look a little fatigued. Earnings were generally solid considering the economic backdrop but it just seemed that the steam is starting to ease back. So I decided to step back and look at the bigger picture.

From my old days as a macro analyst, there were a number of ‘back of the napkin’ indicators one would look at to gauge the temperature of markets. These included the traditional PE and PB ratio but also other indicators like the VIX and fear and greed indictors and ratios. Of course, there is no silver bullet and one would need to look at a number of indicators to come to a more holistic view. Let’s have a look:

Often, one could look at the ratio of lumber to gold or oil to gold as a gauge of measuring the outlook for the ‘real economy’ vs. safe haven demand. For example, lumber, often used as a proxy for ‘homebuilding sentiment’ was weighed against the traditional safe haven of gold. A rising ratio would indicate that there was confidence in the economy and hence rising lumber prices relative to gold.

The current ratio suggests that sentiment is over 1 standard deviation away from the long term trend and hence suggests a large amount of optimism in markets – an indication of ‘Greed’.

What about Oil vs. gold? In a normal world, oil demand correlated highly with cyclical peaks in economic activity. This is nothing like a normal world and with suspension in global travel last year and current travel restrictions, one would expect this ratio to not show the same optimism albeit for idiosyncratic reasons. This ratio is almost 1 standard deviation below the trend.  Although showing some uplift recently, it remains squarely in ‘Fear’ territory.

In aggregate, the contradictions of these two ratios leave us to look elsewhere to draw further conclusions. 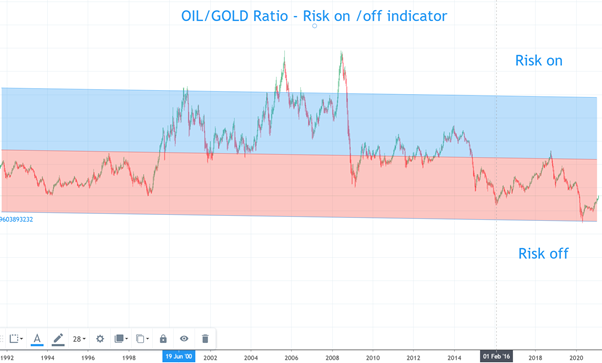 Given the largely range bound (and anchored by the Zero lower bound) US 10 year yield, a relative analysis of the SP 500 index vs the US 10 year yields little more. It effectively appears to mirror the move in the S&P 500, which itself is setting record highs (Greed) – so lets continue. 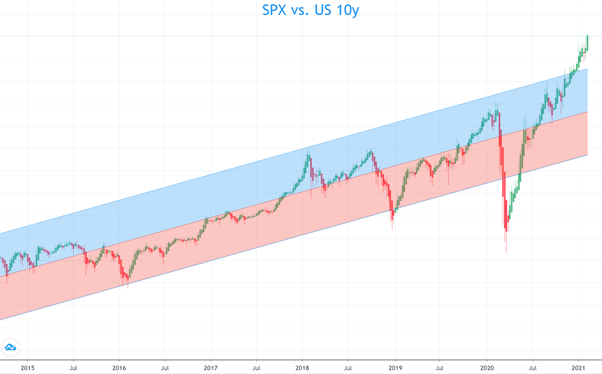 The Vix index is an equity volatility index and serves as a reliable ‘real time indicator’ of the market’s expectations for volatility over the coming 30 days. On this index, a higher number signals risk off (bad for markets) and vice versa.

By way of comparison, during the dot com boom/bust, VIX spiked to around 50, during the GFC it spiked to over 80 with similar levels during the pandemic crash last year. At present VIX is at a benign 21% (Neutral/Greed) although appearing to remain sustainably above the pre-pandemic lows closer to 10%.

Recently, the VIX has started to tick up slowly. Its not apparent on the longer term chart but it correlates with my gut feel. This one I will watch closely and if we see this creep up surreptitiously, the alarm bells start ringing. It tends to move quickly so even though we aren’t in outright ‘Greed’ territory, it’s keeping me up at night. 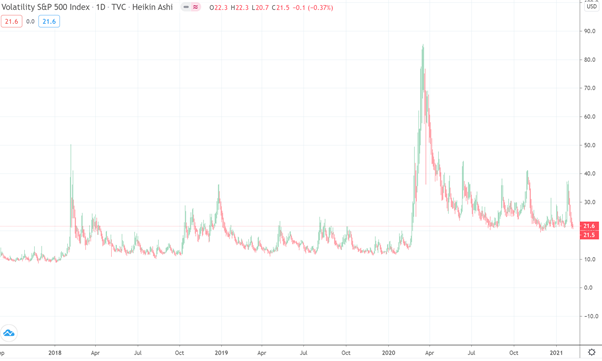 What about the longer term fundamental charts?

Heck, I was worried pre-pandemic. The inexorable surge in markets has been relentless. I have not made any bones about this and have publicly written about having de-risked my own portfolio after markets bounced subsequent to the March crash last year.  This is just based on my own tolerance for risk and is by no means a reflection on what any individual should be doing with their own portfolio (please get independent financial advice).

Let’s look at a traditional measure like a Price to Earnings (PE) ratio. Most readers are probably familiar with this metric. This ratio effectively shows you how many ‘years-worth’ of earnings you are willing to pay for a share today. It is by no means the be all and end all of metrics but can serve as a reliable indicator on how expensive or cheap stocks may be at any given point in time.

The Cape ratio (cyclically adjusted PE) adjusted the PE for inflation over the last 10 years. At around 35, this ratio is at its highest level since the dotcom boom bust when we saw average PE’s over 45. At an average PE over 35 times it would take 35 years of earnings to pay for the price of the average share today.

Now I acknowledge that the composition of the index now includes a large number of growth stocks which potentially inflates the PE ratio off the index as a whole. The logic indicates as a rebuttal that tech stocks carry lofty multiples today but as their growth unwinds, the PE’s tend to re-rate as earnings catch up.

As such let’s look at another indicator like the Price to Sales ratio. This ratio effectively tells you how many years worth of sales it would take to cover the share price today.  P/S ratios vary widely from industry to industry. Usually a P/S below 1 signals a massive bargain while the average for the long term comes through around 1.8. Current metrics suggest that investors are now willing to pay almost three times sales for a stock today. This is higher than any level we have seen in the last two decades – Greed.

What are the alternatives?

As someone who likes to manage my wealth across multiple asset classes I would be remiss not asking the question, what does the alternative look like. For this exercise I traditionally like to look at the comparative or the ratio between US Treasury yields and the earnings yield on the S&P 500.

Whilst many commentators tend to compare the dividend yield on the index to the yield they receive on US treasuries as an example, I prefer to look at the earnings yield simply because some companies will not payout all of their earnings as dividends and rather roll some of that value back into the company as a means of future growth.

We all know that US yields have been anchored at close to the zero lower bound since the global financial crisis in 2008. More recently there are some fears that the rampant stimulus programs both monetary and fiscal will eventually start yielding higher inflation and that this may start putting upward pressure on yields (and downward pressure on bond prices).

In fact the differential between US Treasury yields and an earnings yield on the index could also be implied as a form of equity risk premium. I like to use this to indicate whether I, as an investor, am being adequately rewarded for taking on equity risk relative to the ‘risk free’ alternative. 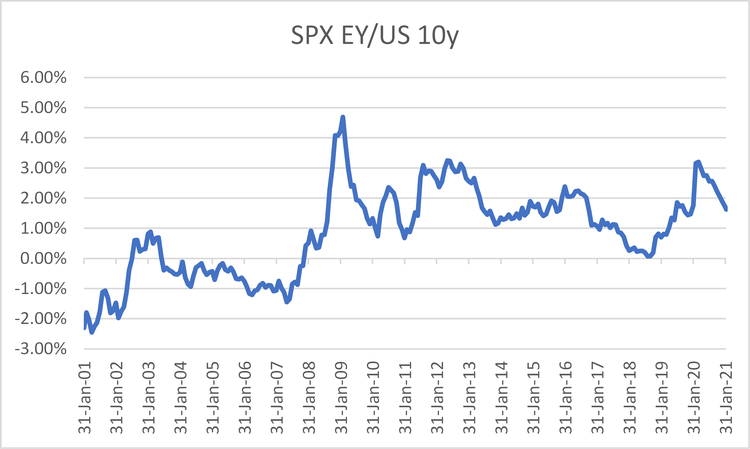 Now while this ratio has certainly started to compress, it is not reached extended levels which suggest that equities are not compensating sufficiently for the addition al risk. As such, the party continues for now – Neutral.

What does this all look like in my head?
Part of the catharsis of writing is that it allows me the ‘Pensieve’ from Harry Potter. I am able to decant my thoughts and ideas onto paper and try to formulate them into a holistic world and investment view. The table below is the synopsis of this process to unpack the knot in my tummy and try to overcome my own perceptual biases. 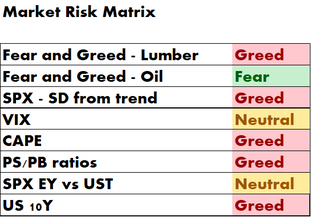 Many risk flags are flashing. The image above is not exactly what I expected. I expected a slightly more nuanced and balanced view. Technicals tell me that while the S&P can indeed correct a healthy 10%, that should it find support, that we may yet see levels of close to 5000 index points.

How do I reconcile this in my own strategy? Firstly, I buy and own companies I like for the long term. They form part of my long term portfolio. Then I execute a tactical portion of my portfolio where I am more likely to be opportunistic and take advantage of short term swings. In aggregate I de-risked last year and have remained cautious. On the tactical side, I had added risk in the latter part of last year and have now selectively started taking some profits off the table – waiting for a better opportunity.

If the world manages to beat this pandemic, there is an underlying human spirit which I think may propel optimism in the economy to new heights. If the effects of the pandemic linger, we may bumble along, see a short term correction and continue building from there. Over the long term, I hate to bet on the end of the world. I have always said that there is no upside in betting on it. It you’re right, it’s the end of the world and if you’re wrong, well you’re wrong.

Markets are a risky business. The mania and cult like following which has built up in recent times is concerning. There are now many participants in the markets who have not lived through a proper correction cycle. Markets are cyclical and history tends to rhyme. I believe in democratizing markets but it is ever more important that participants educate themselves and understand that it is a marathon and not a sprint… Markets are by definition – a Risky Business. 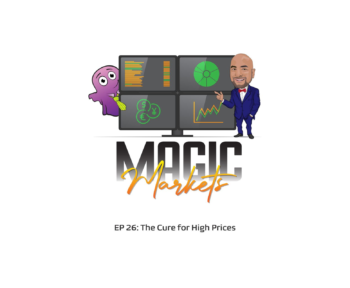 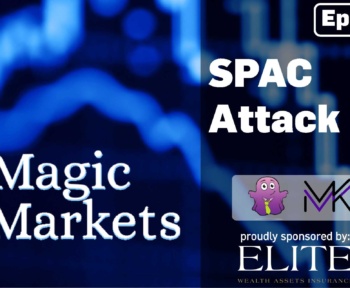 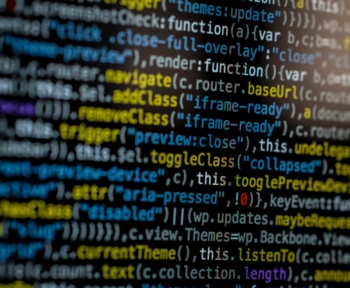