Last week I had the pleasure of speaking at the Elite Wealth Virtual Conference. Some people who were unable to attend but saw some of my tweets on social media (@MohammedNalla) requested that I put my thoughts together in the form of speaker’s notes.

The article below comprises some of my speaking notes from the address. The intent was to look at South Africa from a ‘Wealth’ perspective and to provide some insights into how SA stacks up in the global wealth stakes. We also look at what some of the pressing points are in driving the decisions of the wealthy as well as how to approach multi-generational wealth creation.

How do we define wealth?

Wealth is a great thing. I often like the old story of how you give a man a fish, he eats for a day, teach a man to fish and he eats for a lifetime. But wealth is a different creature. It’s the man who knows how to fish, who then saves his surplus and uses it to hire more people to fish for him, generating wealth, jobs and value on a scale vastly greater! So if money truly makes the world go round, what’s happening in South Africa?

Lets first start by defining wealth. Some people look at it as ‘high earners’?

In SA , this would mean anyone earning more than R1.5m a year and in the top marginal tax bracket.

There’s roughly 75 000 of these people, enough to fill about 80 Airbus A380’s – our about 5 days worth of flights to Dubai on Emirates. Not a heck of a lot. Yes it’s a generalization, but these 75 000 are responsible for around half the country’s tax revenue give or take and they are MOBILE, because wealth is mobile. This illustrates the fact that SA’s tax base is remarkably thin and vulnerable but is also highlights that SA remains a very small market when considering disposable income.

But this is a misnomer. If recent SARS reports of people driving Ferrari’s but declaring under 400k a year in income are to be cited, it is clear that wealth is not just measured by income, but perhaps a better measure is ‘Net Worth’. Now there are number of ways to slice this, incl or excl primary residence etc. Lets look into how SA fairs in the global wealth stakes: 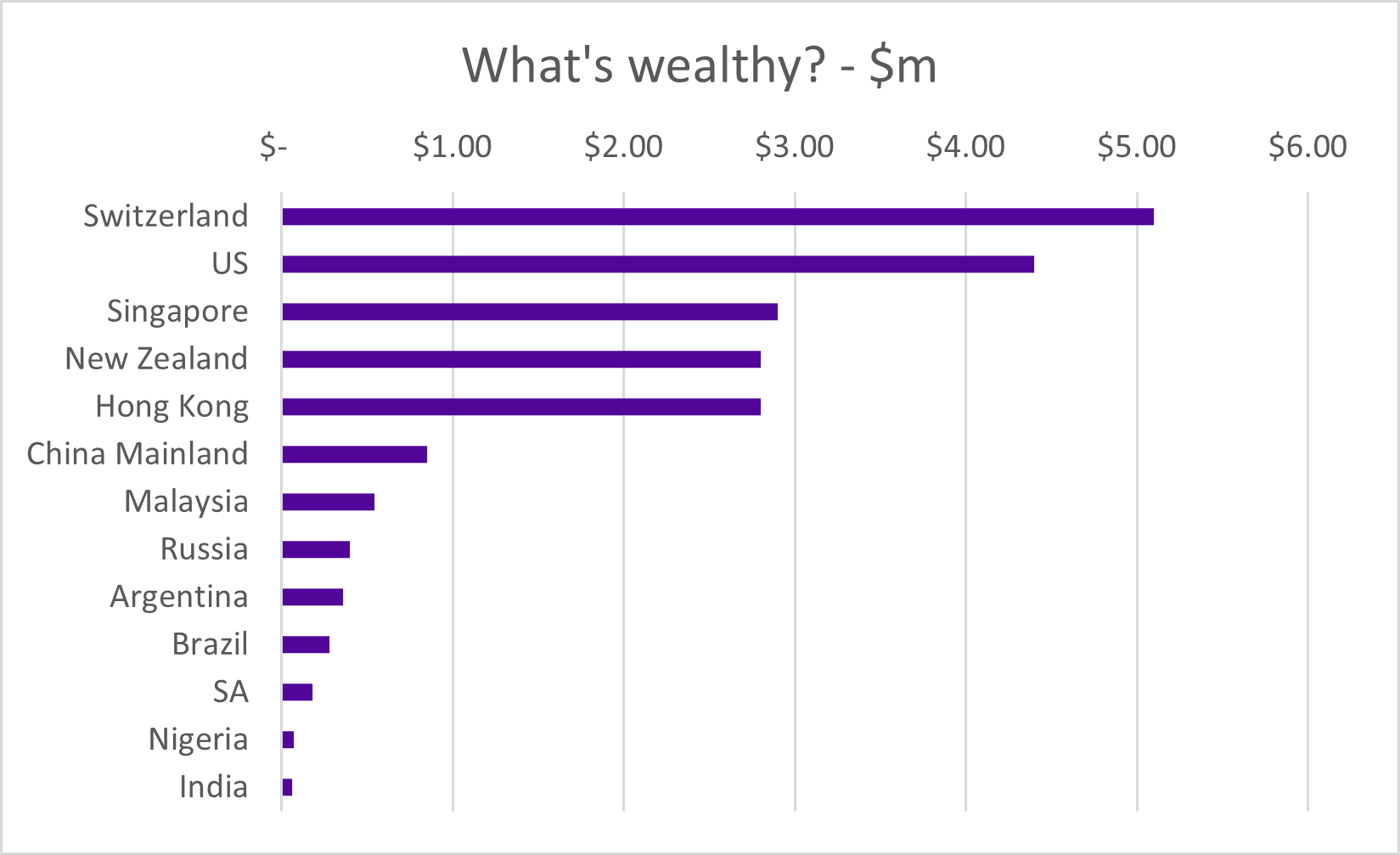 Who are the top 1%. In Switzerland, to be wealthy you need to have over $5m, about $4.4m in the US. In Singapore, where every second household is a dollar millionaire, you need just shy of $3m. China is a good example of how ‘developed’ vs. developing countries are faring. Hong Kong (now part of China is seen as developed and the 1% kick in at $2.8m while mainland China (developing) comes in at 850k. SA gets lost on this chart down at $180k (R2.7m), so lets Zoom in.

As you can see, we fare worse than our BRICS peers barring India. In a nutshell, in aggregate, SA is not a player when it comes to the global wealth stakes and with massive inequalities, stands out among other outliers like India. Asia as a region has seen the fastest growth in millionaires and billionaires globally. 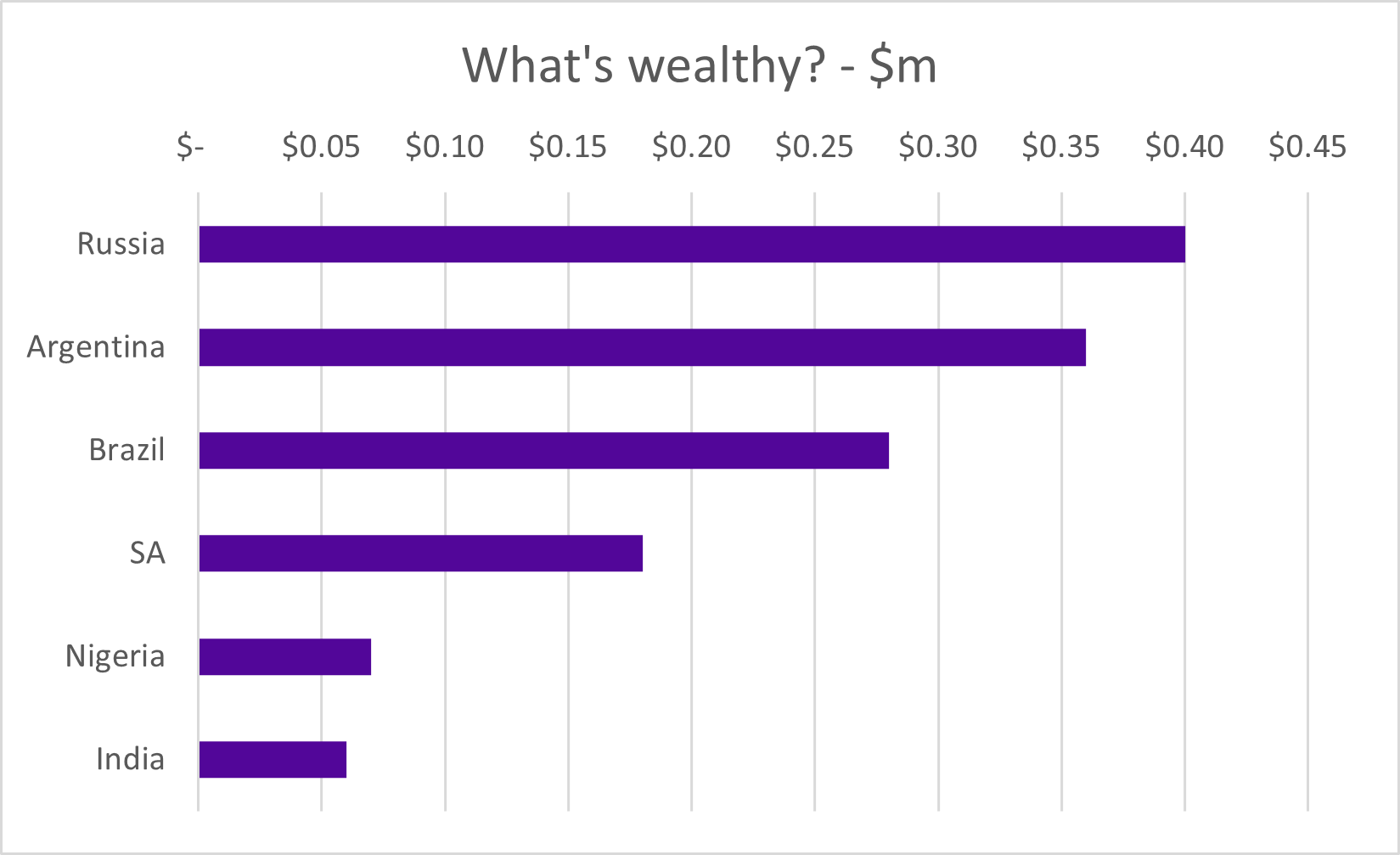 But aggregate numbers lie. Its like having your head in the oven and feet in the freezer… on average you’re ok. SA has massive inequality and there are many VERY wealthy people who choose to call SA home.

There is also a strong correlation between entrepreneurship and wealth. This infographic from Visual Capitalist shows how the proportion of wealth in Business Equity and Financial assets rises precipitously the wealthier one gets. 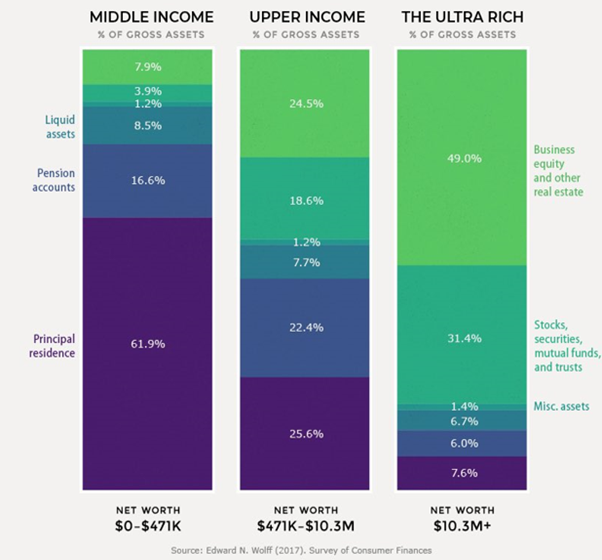 Markets have favoured the wealthy

So how have the markets been to the wealthy during this pandemic? Firstly, let it be said, that even among countries, there is a dichotomy between haves and have nots. Considering this, we have seen wealthy countries pump trillions of dollars of support into their economies while countries of more straightened means have trailed. Yes, these programs have helped keep businesses afloat and keep people employed. But what effect has it had on the wealthy? 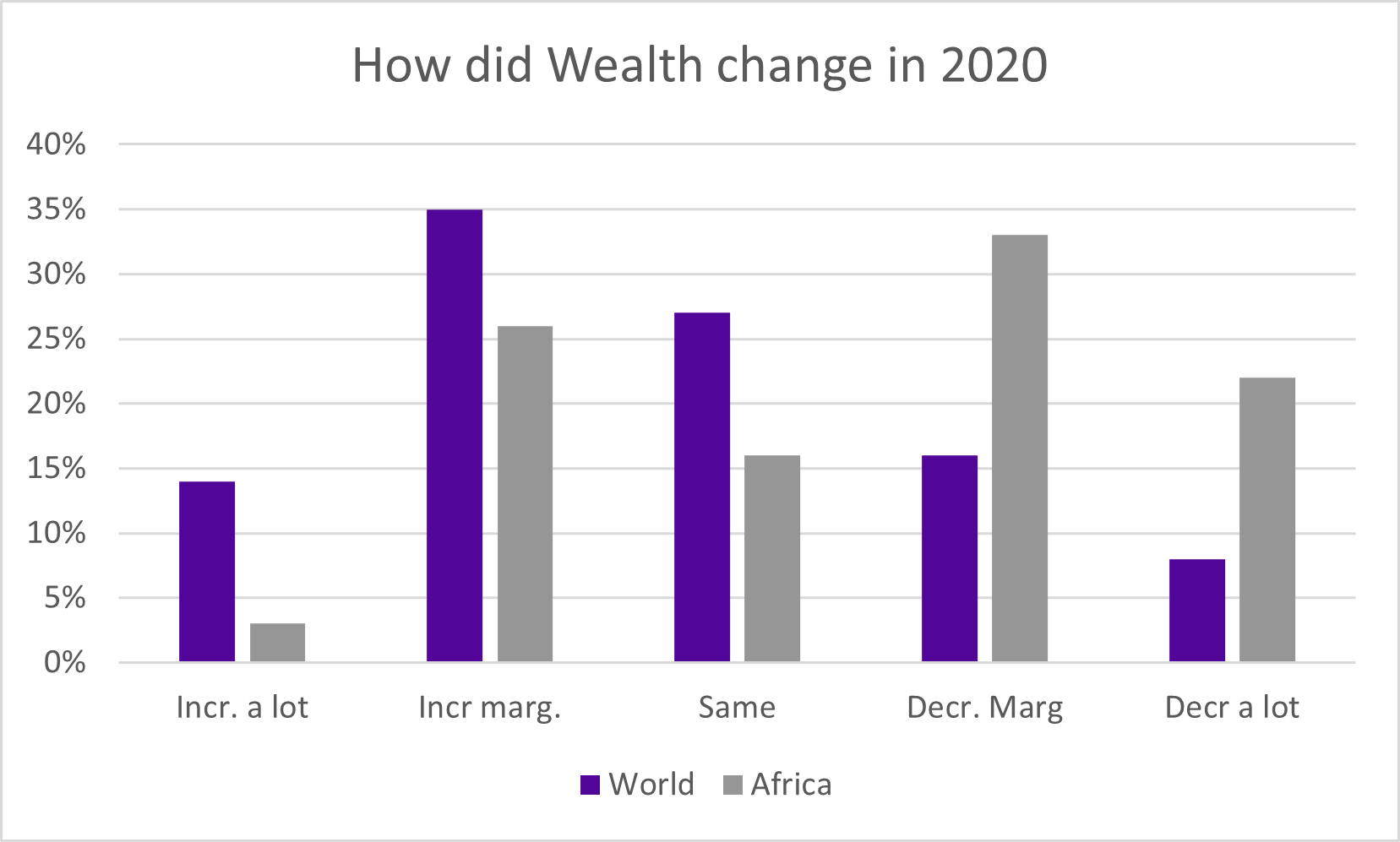 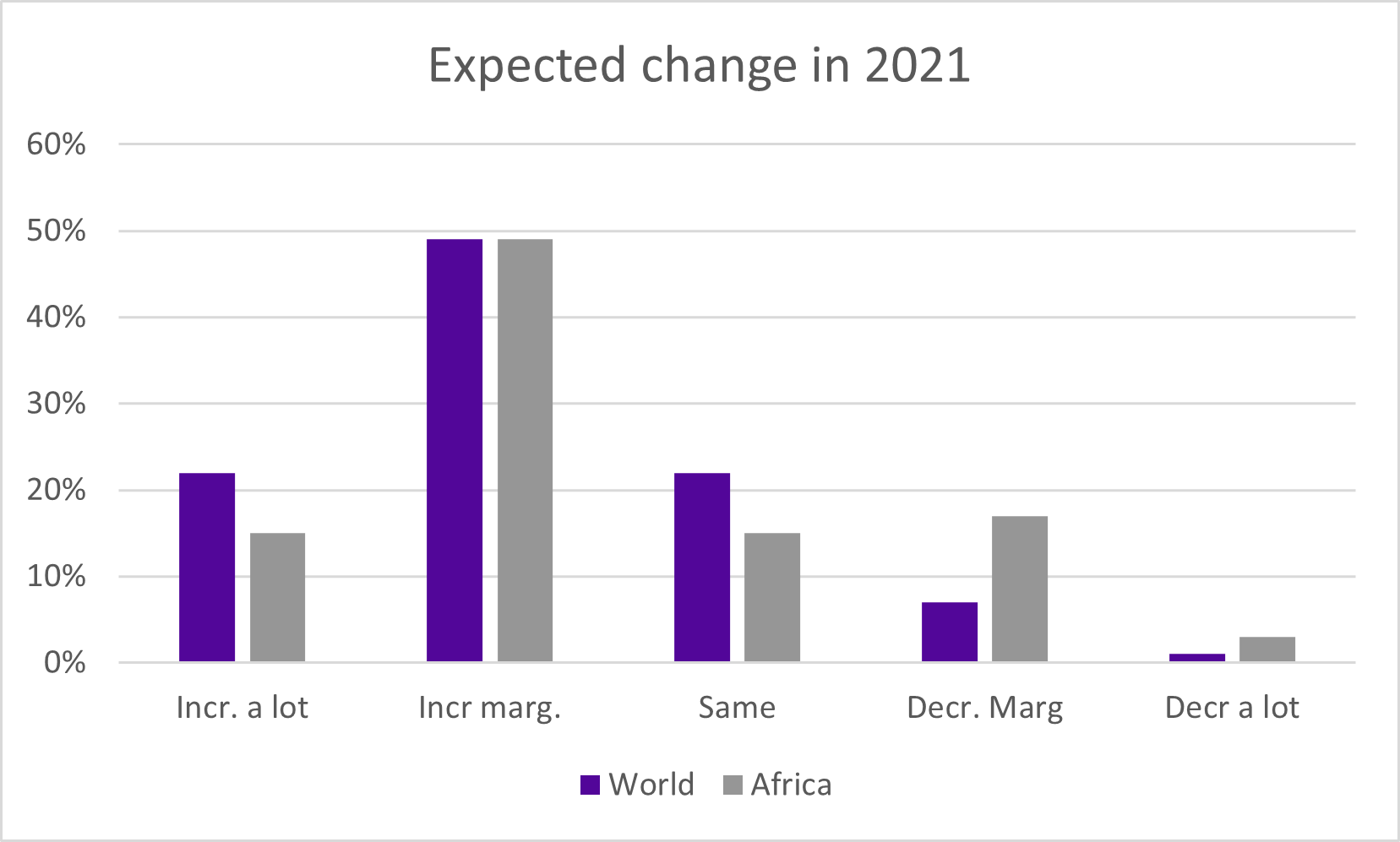 In 2020, almost 50% of wealthy people saw their wealth continue to increase, with only a quarter seeing a decline. 2021, they expect more of the same. Africa, less rosy with around 50% seeing a decline last year and working off a lower base this year.

Stimulus policies have also seen a lot of money enter the stock market which disproportionately favours the wealthy. Since the start of 2020, the S&P 500 is up over 18%, from its troughs in March, its up almost 80%!

Given that the rand has been well behaved over the last year, SA markets have also been similarly good. But if we scratch deeper, if you exclude the stocks on the JSE with global exposure, SA Inc over the same time frame has been less flattering.

What’s also quite interesting is that the dollarized performance of alternative assets (as measured by Knight Frank) are all up by double digits. Jewellery and furniture have kept pace with inflation, but cars (193%), wine (127%), watches (89%) all present compelling ways in which the wealthy have not only diversified their wealth, but potentially derived utility. These assets have also protected against debasement of fiat currencies which I have written about on my blog here and here.

I have purposely left Bitcoin off this chart as its performance because at 18000% it is unprecedented.

But its worth a mention. Crypto assets, non-fungible tokens like crypto art are all entering the fray as a new generation of wealthy investors take the reins. Their impact on markets and the world of investment is being felt now and one could argue is still in a nascent stage of development.

What are wealthy people thinking about? Protecting their wealth –

Inequality and risks to higher taxation are front of the agenda. Wealthy people are increasingly seeking out tax friendly jurisdictions and alternative passports. In a post pandemic world of working remotely, many are opting to relocate either to rural or coastal locations or potentially abroad.

The US has seen an exodus of sorts from NYC to Florida… Texas is popular for entrepreneurs. In other parts of the world, fears of civil unrest and conflict have also seen wealthy people vote with their feet and their money. Capital flows, like water, to the path of least resistance.

What about SA in a global investment context?

The fears of the wealthy are not unique to SA. The trends I discussed are global in nature. How do I see it playing out?

Globally, wealthy people will continue to relocate from areas where their lives and wealth are at risk to friendlier climes. But in this context, SA is not the worst place to be. It reminds me of what an old friend use to say to me:

I maintain SA interests but unfortunately, SA is not at the top of the investment agenda. SA is a yield play and for as long as growth remains so poor, growth seeking capital will flow elsewhere. For those seeking EM exposures, arguably, Asia and LatAM present juicier prizes.

A niched approach and sniffing out opportunities

That’s not to say there aren’t niches in SA which hold promise. Agri, Clean energy, water are all key areas of necessity and hence great opportunity. I have written about some of these in previous posts. SA needs friendlier and simpler regulation and competent execution – most of which has been sorely lacking.

SA investors have made a habit of investing offshore and this is not surprising or incorrect. Utilizing your offshore allowance to explore the massive opportunities that exist in the world but not necessarily in SA – Med Tech, cloud computing warehouses, large demographic consumer markets, etc. is certainly part of a wider strategic imperative for globally conscious investors.

Crypto is interesting in that it is eroding the barriers of moving wealth globally – its fungible and transferable, and easier to move than art or jewellery or cars, but it doesn’t give you utility other than seeing its value escalate! It remains an exciting space and is still in its developmental stages, but is not for the faint hearted.

Overall equity markets look frothy to me. Valuations appear stretched but markets can remain irrational longer than you or I can remain solvent. And low rates compound the problem of extended valuations. However, there are many quality companies out there. But you need patience and you need to realise that markets are cyclical. You need to be able to withstand a 10-25% correction and still stay standing. You also need to be aware of your own risk tolerance.

Decide your risk profile and take a long term strategic view. Remember, when you start talking real money, its not about this quarter or next, its about multi generational wealth creation.

I’d like to close with one of my favourites, a Greek Proverb – Societies become great when old men plant trees knowing that they will never sit in their shade. When building your own wealth, take a long term view, ride out cycles and be like the old men and look beyond tomorrow.