The Rise of the Variants

Most people like quarterly updates. Given the fact that it’s been about a quarter already since I wrote the piece, Covid on my mind, I thought it appropriate to revisit the theme and to look at what progress has been made. The first piece was largely viewed from a humanitarian standpoint so I have also been thinking about the global response to this pandemic from a more economic stand point.

A lot of what was said and discussed in the original piece remains relevant. As such, ICYMI, I would urge you to read the piece so that you have a contextual base to what I will be discussing. That said, a precis of points covered in January and some key developments as follows:

We discussed the SA and UK variants, but variants have become the mainstream and are largely responsible for the 3rd wave in many countries. Variants are believed to be more virulent and potentially deadlier to a younger demographic.

At the time of writing in January, Canada was (and remains) a stand out performer in number of vaccines procured. This hasn’t, however translated into jabs in arms as several logistical challenges and other constraints have stymied the effort here. That said, over the last month, the percentage of people vaccinated has risen from around 2.5% to 20%.

In January, Israel had procured about 150% coverage of vaccines based on its population size. When viewed relative to the disease burden, it certainly was no outlier albeit in the top 15 for countries with the highest cases per 100.

Yet, here we are 3 months later and Israel is the stand out performer having administered around 118 doses per 100 people. Now, because some vaccines may require more than one does, this still only translates into a 61% of people in that country having at least received one dose but it is by a long shot, the best performer globally, followed by the United Arab Emirates having administered around 91 doses per 100 people. More recent news reports have highlighted the difficulties that Israel is having with vaccine suppliers and so the next cohort of vaccines procured may well be delayed and could see their enviable position as a vaccination outlier compromised. Watch this space.

The critique of performances like the UAE and Israel, is that both are case studies in relatively small geographic regions Both with relatively small populations. That’s why I haven’t show these charts again. But this got me thinking. Could the response to the global covid pandemic be used as another lens through which we could assess emerging markets and their ability and efficacy in enacting structural reform?

Surely an existential threat like this would be the ideal pretext to galvanize governments around the world into action. As such it stands to reason that a country’s response in delivering vaccines as well as a credible vaccination program, may also be representative of a state’s generalized capability in not only service delivery but in addressing and implementing structural reforms?

As I have written about in previous pieces on emerging markets (see Submerging markets), emerging markets should not be viewed as a homogeneous entity. Instead, there are a variety of idiosyncratic factors influencing any specific markets macroeconomic and socioeconomic performance.

I have selected a subset of emerging markets from various regions and time zones to try and illustrate the point. Unfortunately, South Africa does not show up well even among our EM peers, but I will not dwell on that point. Some emerging markets have been successful in procuring as well as administering vaccines.

The first chart illustrates the status quo. What share of the total population has received at least one does of the vaccine. From this, you can see that markets like Chile and Hungary have even outperformed their developed market peers. 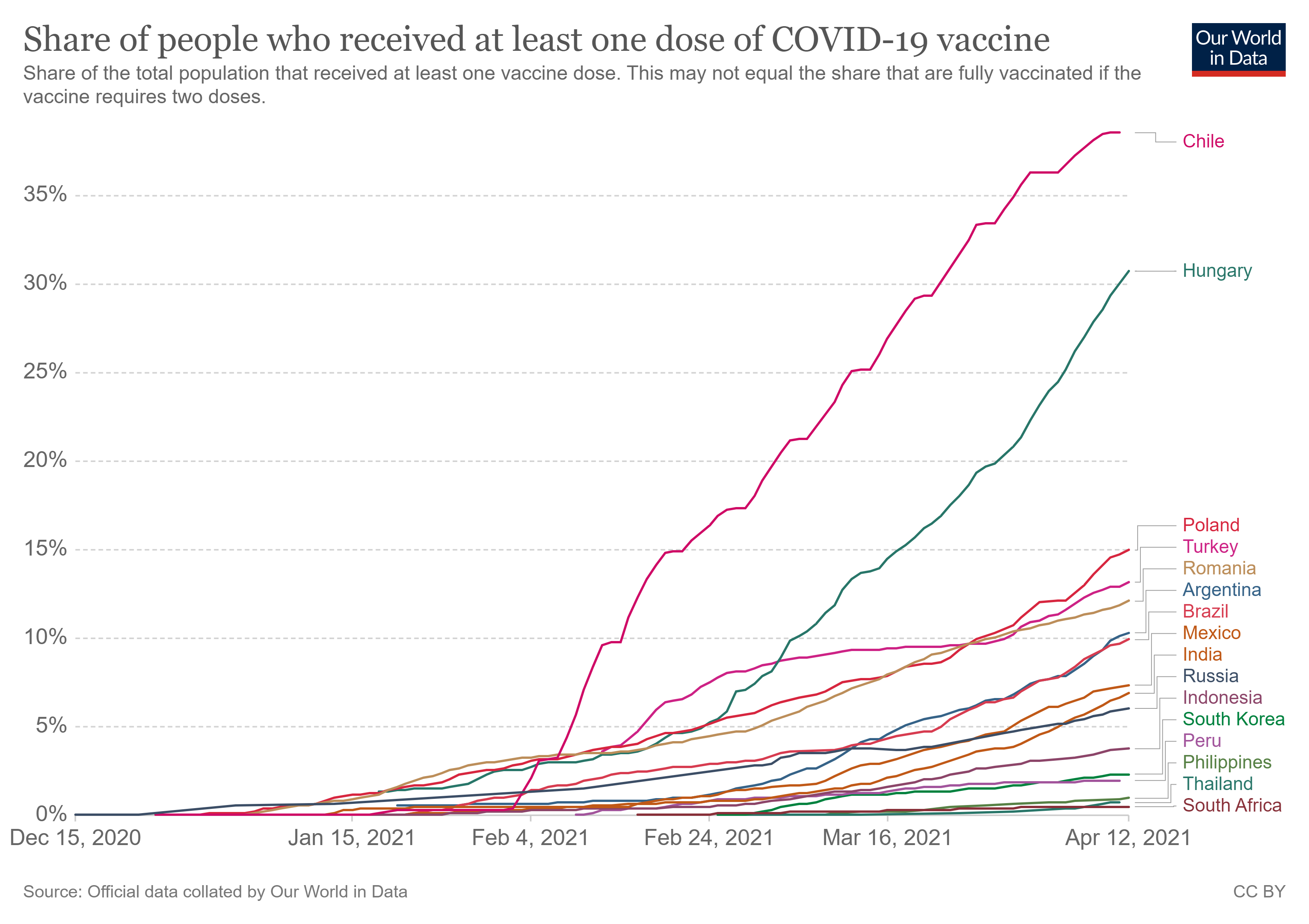 However, as with most trends, it is worth look at the delta or the rate of change. For this, we can look at the rolling 7 day average of doses per 100 population as an indicator of whether programmes are ramping up or slowing down as per the chart below. From this, we can see that Chile peaked about a month ago, while Hungary continues to accelerate. This provides a ‘real time’ feel for which countries are on the front foot and making progress and is useful to view alongside overall coverage levels.

Lastly, the much written about ‘R’ or the effective reproduction rate is important to note as well. The reason is that the vaccination procurement and implementation are only one end of the equation. The other remains the virus’ spread and infectiousness. Think of it as supply and demand. The ‘R’ remains ever more important given that the variants have meant that despite vaccination efforts, that transmission and control remain a vital element in getting the pandemic under control. 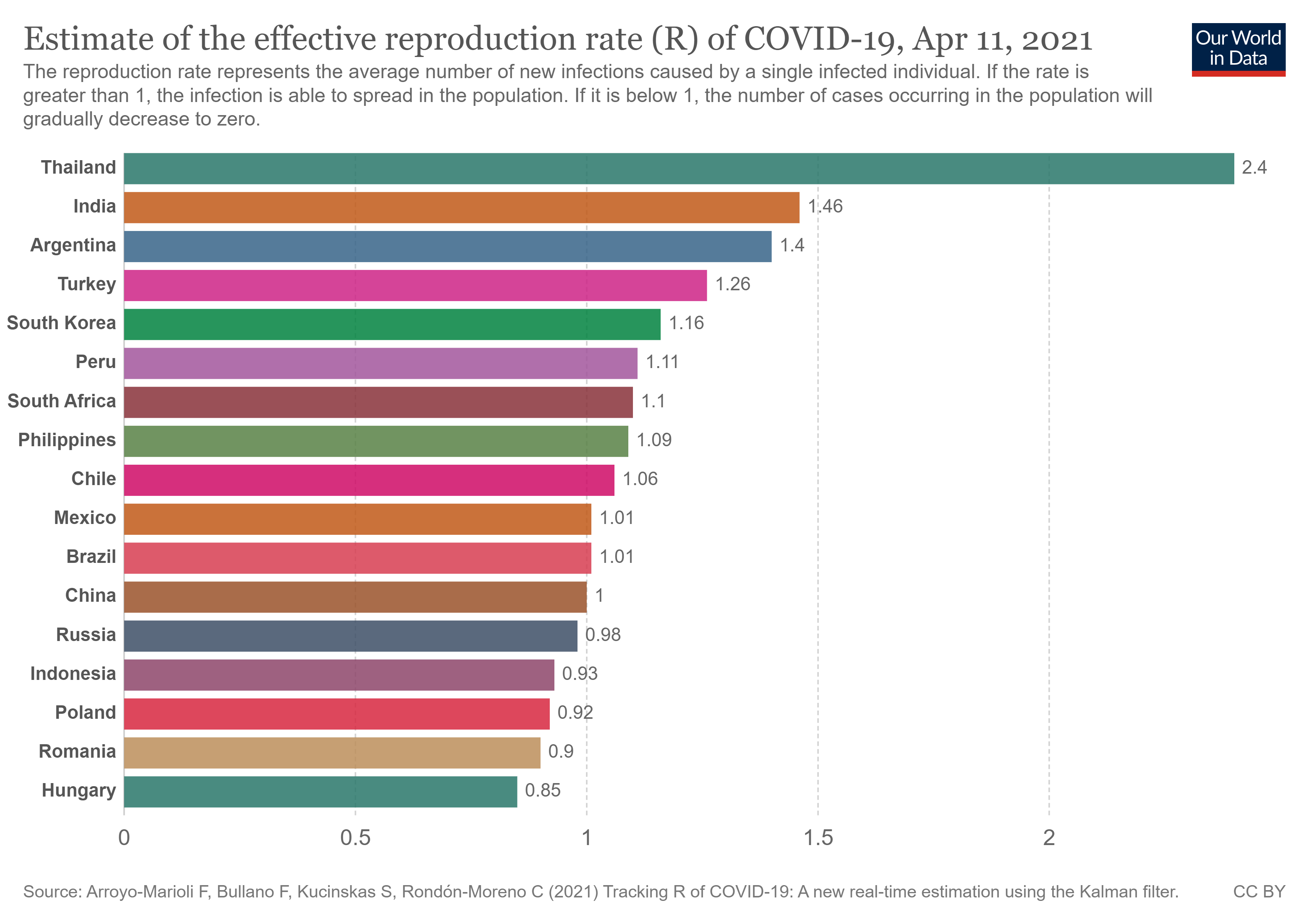 While the policy response and implementation of a covid response by respective markets will undoubtedly influence each market’s respective economic rebound, it stands to reason that the underlying structure and performance of the response may provide an interesting insight into each respective sovereign states potential over the medium to longer term.

There is a plethora of data available globally pertaining to the COVID-19 pandemic, vaccine procurement, vaccine deployment. Given the asymmetric global response these data points, while not infallible, will represent a treasure trove of potential insights to inform winners and losers within a global and more specifically within an EM context.

I, for one have incorporated these metrics into my more generalized emerging markets risk matrix and while further study will be required to ascertain causal relationships and the impact on long term asset prices, the fact of the matter is that we are living through history and making it every day. Other recent reports are showing that the Johnson and Johnson vaccine may cause blood clots resulting in the suspension of its use by the US and South Africa as well. The SA variant may also be able to penetrate the defense provided by the Pfizer vaccine.

These real time developments prove how this remains a fluid situation and how we not only needs to maintain a long term lens on what a global recovery will look like, but also that one needs to stand ready to continue to incorporate an ever evolving data set and scenarios into one’s risk and strategic planning.

As always, I have advised some corporates on their own risk matrices pertaining to COVID as well as other macroeconomic risks. If you would like to explore this as well as some of my other bespoke research for your company, please feel free to reach out to me at moe@moe-knows.com

Lastly, in the piece in January, I also discussed some of the stocks I was invested in as part of my own approach to the broader mega trend of the pandemic. Not all have been winners but it is worth having a look at what the YTD performance has been considering the previous piece was written in mid- January. The stocks mentioned were :

I still hold some of them, lost my patience with others, but the point I would like to end on is that this is a long road. Vaccinations and variants will be a theme which stays with us even as the world starts to mend. Healthcare remains as important as ever, but of course, as you choose your own strategy and entry points, be wary of extended valuations and what the market may already be pricing in.

For now, I will leave you with this neat tool, courtesy of Our World in Data, to slice and dice the data on the Covid pandemic and to find your own nuances in some of the more granular insights that the data may provide.

Is SA’s economy on life support? 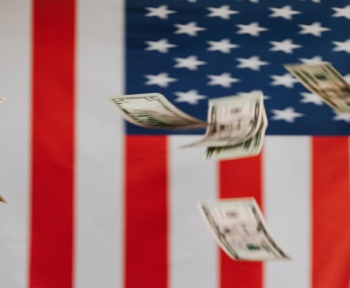